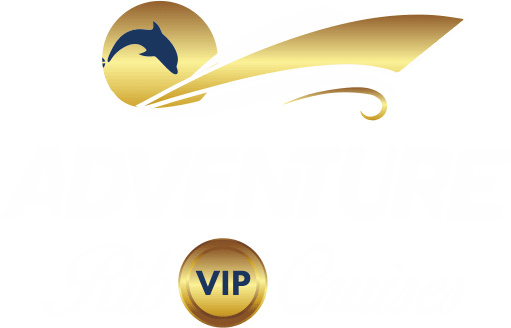 Kallithea Beach is located in the southern part of Rhodes island beaches,

about 9km from Rhodes city. 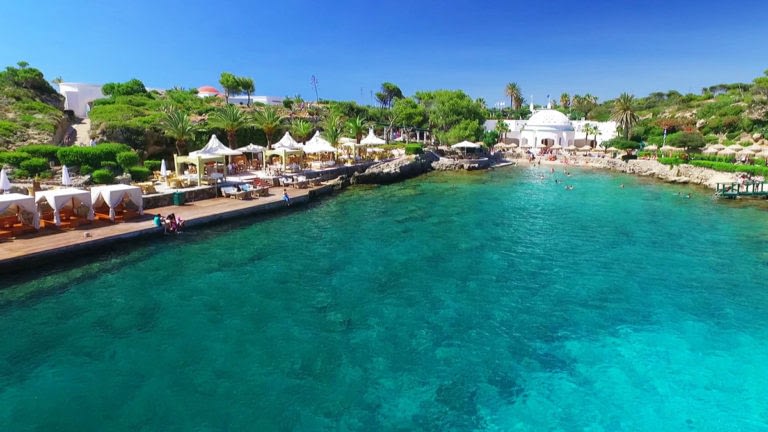 The bay and beach are well known for Kallithea Springs

which were developed during the Italian occupation of the island in the 1920s.

Celebrities from all over Europe and the Mediterranean 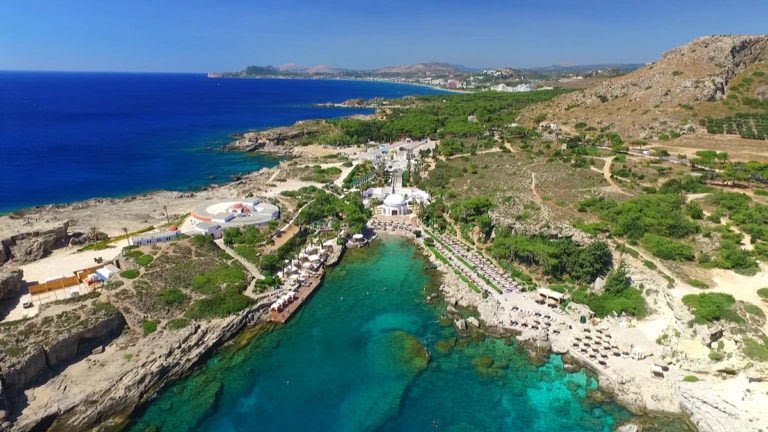 by many as a medicine.

which have been carefully restored and attract thousands of locals

and holidaymakers every year. 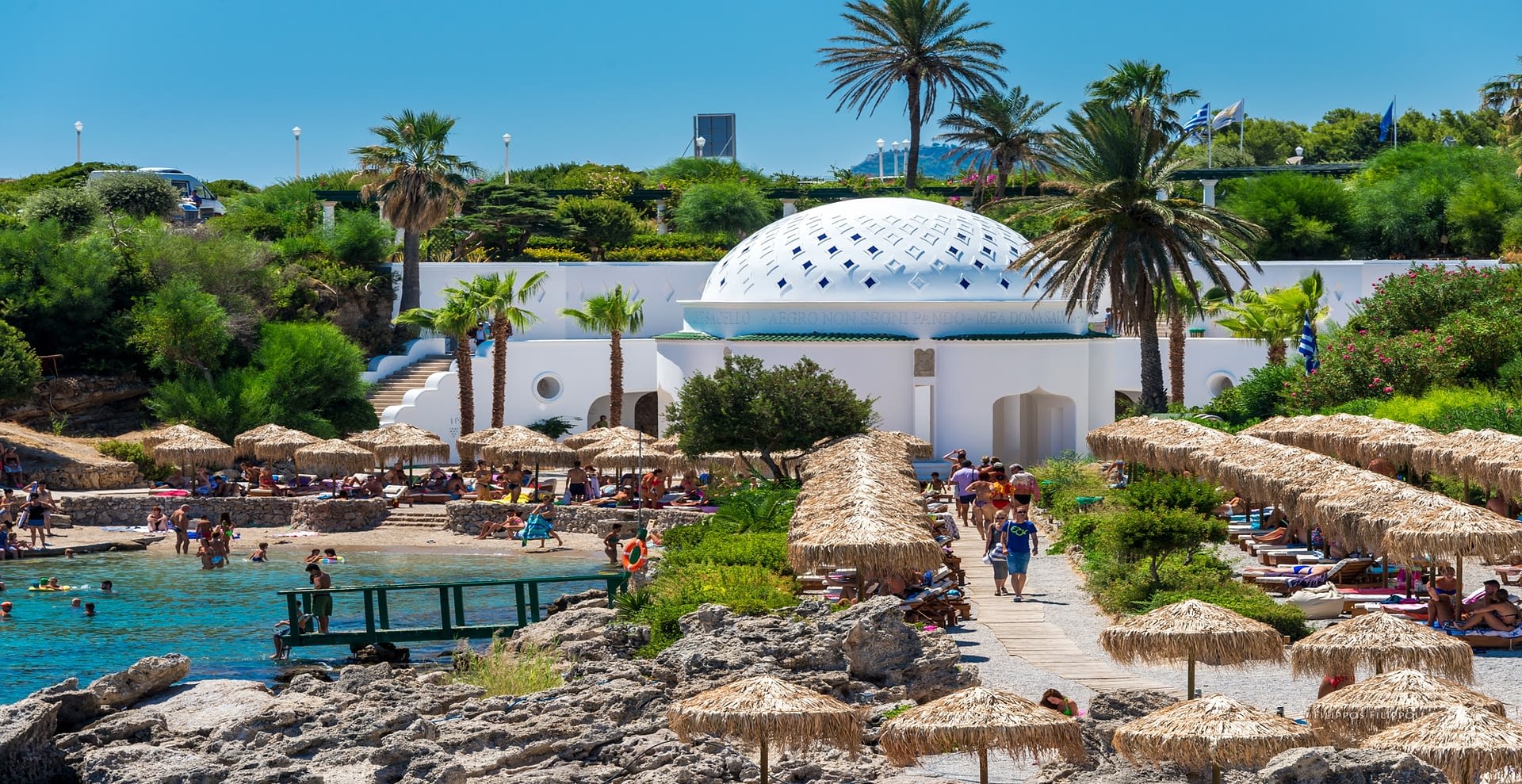 Kallithea is blessed with a fantastic location; a touch of paradise, many says.

If you approach by road the area opens up to a small forest which leads to five beaches,

each very special in its own way. Entering Kallithea

by boat can be breathtaking – the small beach,

the architecture and the amazing calm which Kallithea offers even when it is busy. 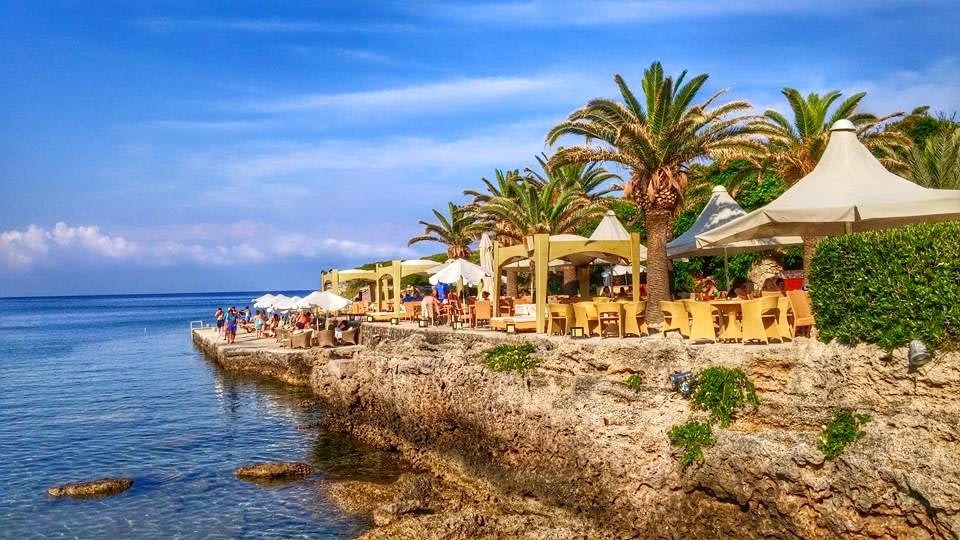 There’s a different aura here; a feeling of past times, a timelessness

which is emphasized by the crystal clear waters and the surrounding hills.

Anthony Quinn Bay is undoubtedly one of the most spectacular bays on the island.

Its water is mesmerizing… 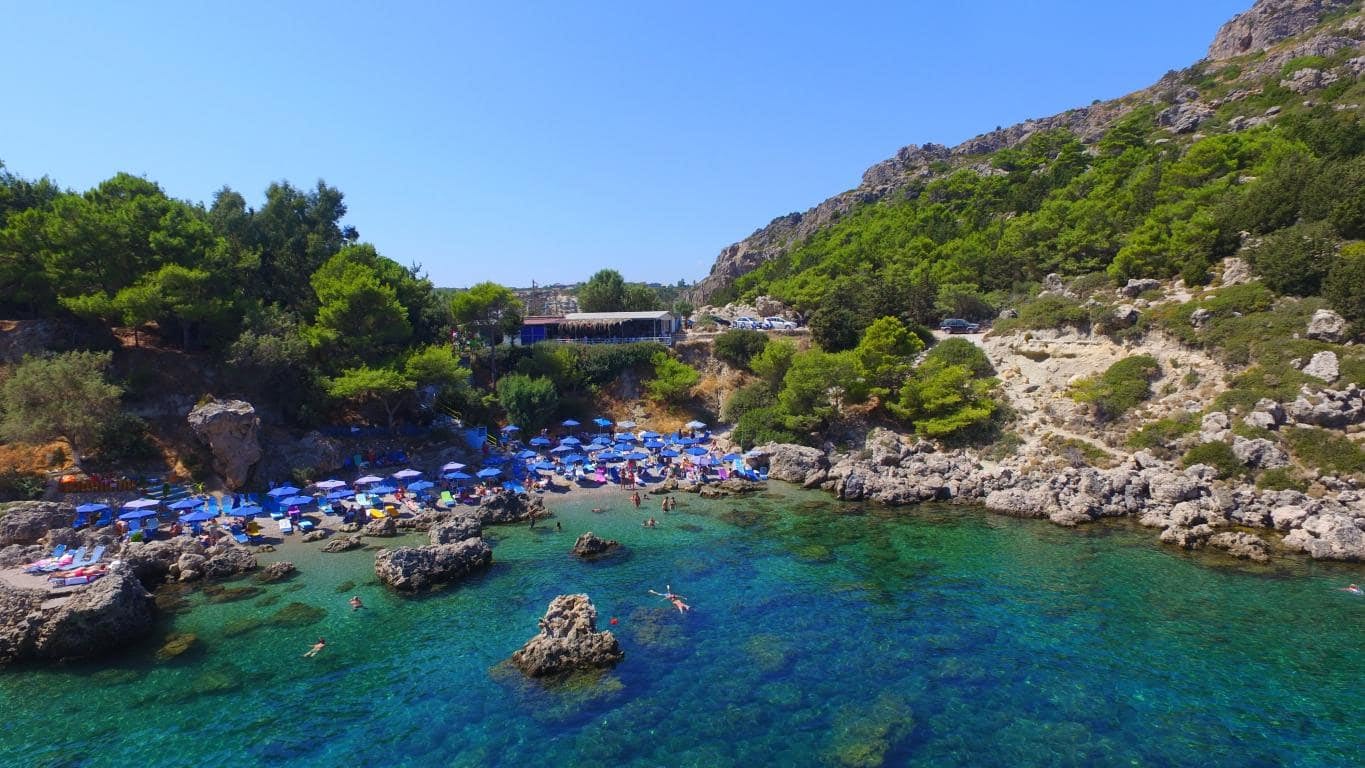 and so clear that you can see to the bottom even though the bay is deceptively deep.

It is a small beach, adjacent to Ladiko Bay; a dreamy, relaxing location ideal for those

who want to get away from the standard stretch of sand. Perfect for swimming

and snorkeling or just taking in its magnificent surroundings. 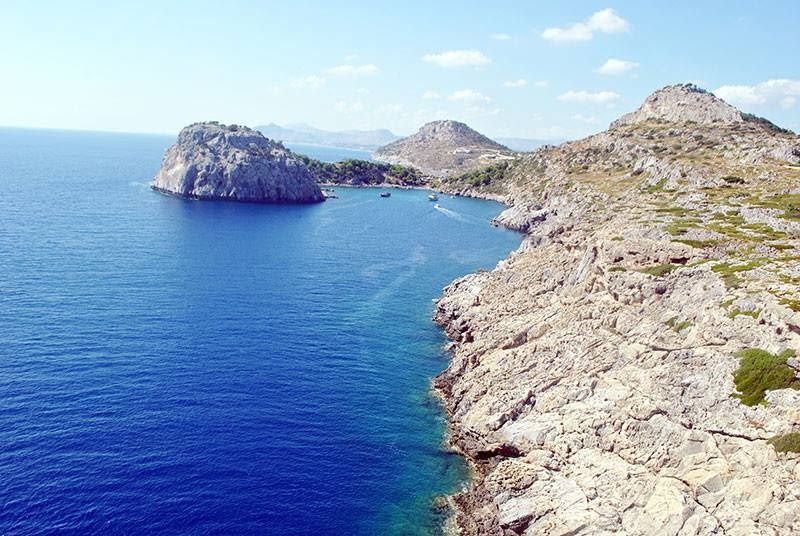 The bay was named after American actor Anthony Quinn

who purchased the surrounding land during the filming

of The Guns of Navarone in Rhodes. 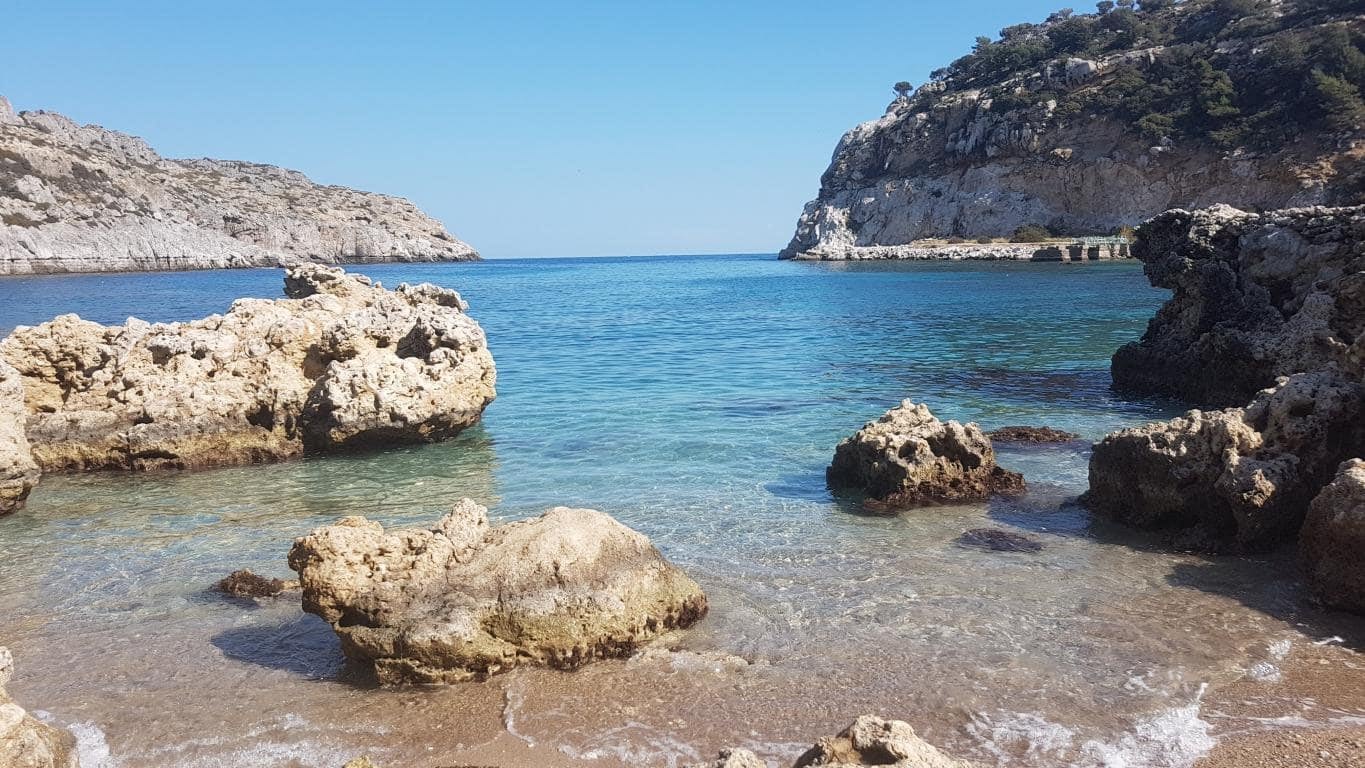 Even he couldn’t resist its charm!

The area was reclaimed by the Greek government in 1984 due to a change in property law.

Its magic remains and beckons holidaymakers from all over the world.

It’s a long beach with golden sand, on the East coast between Rhodes town and Lindos.

(The Virgin Mary of Tsambika) which overlooks the breathtaking bay. 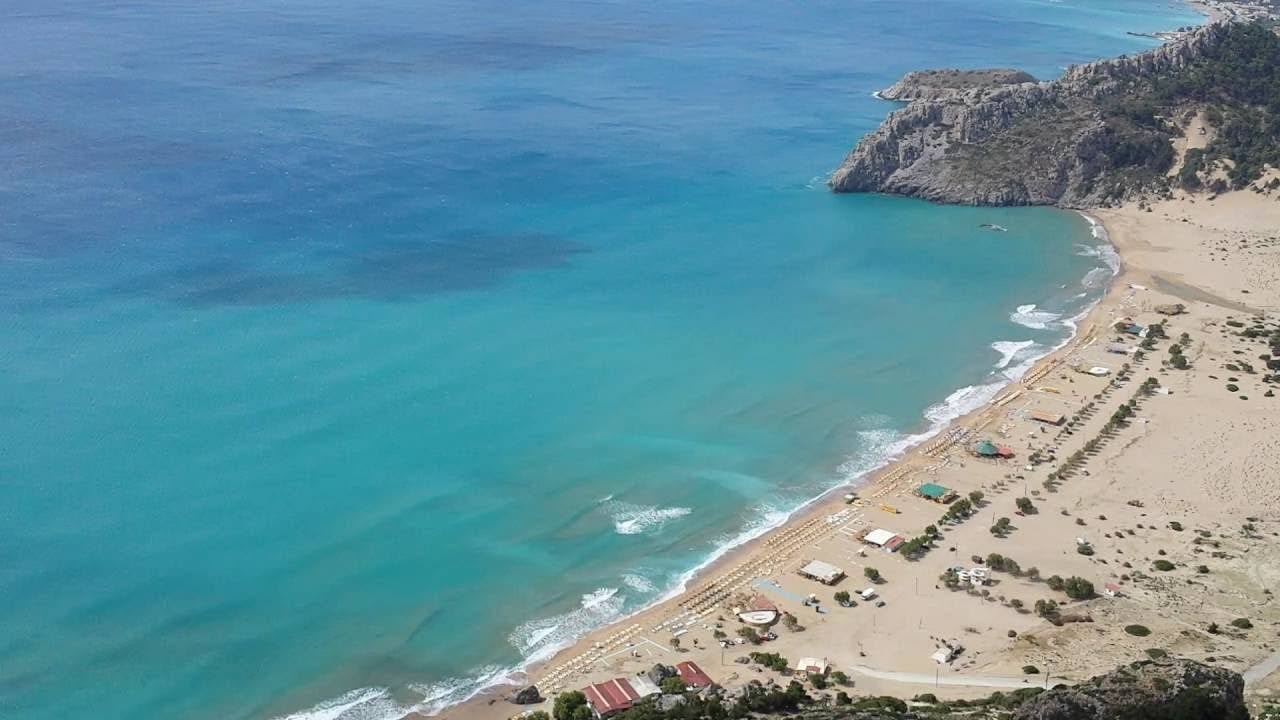 According to locals, the monastery has the power to perform miracles,

particularly for women who experience difficulties in getting pregnant. 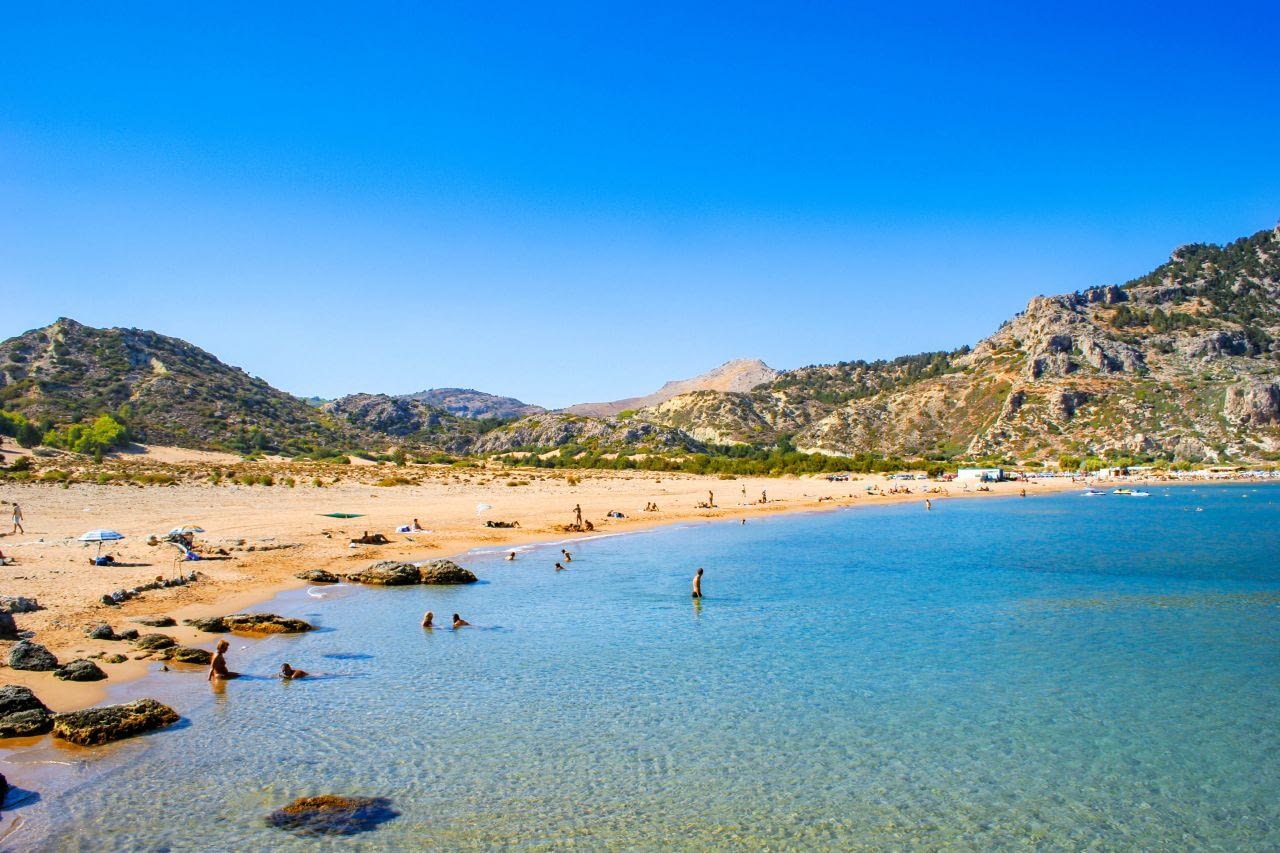 the person is a local Rhodian or has a direct connection,

usually through prayer or miracle, to Panagia Tsambika.

The monastery attracts thousands of believers and visitors

and the beach below attracts thousands of sun and sand worshippers. it is a bustling, popular spot, great for swimming and enjoying a wide range of water sports.

Lindos is one of those places that you will never forget visiting. It is simply breathtaking

and one of the top attractions on Rhodes island.

a beauty that has survived over the ages and, even in the height of the summer,

manages to mesmerize its visitors. 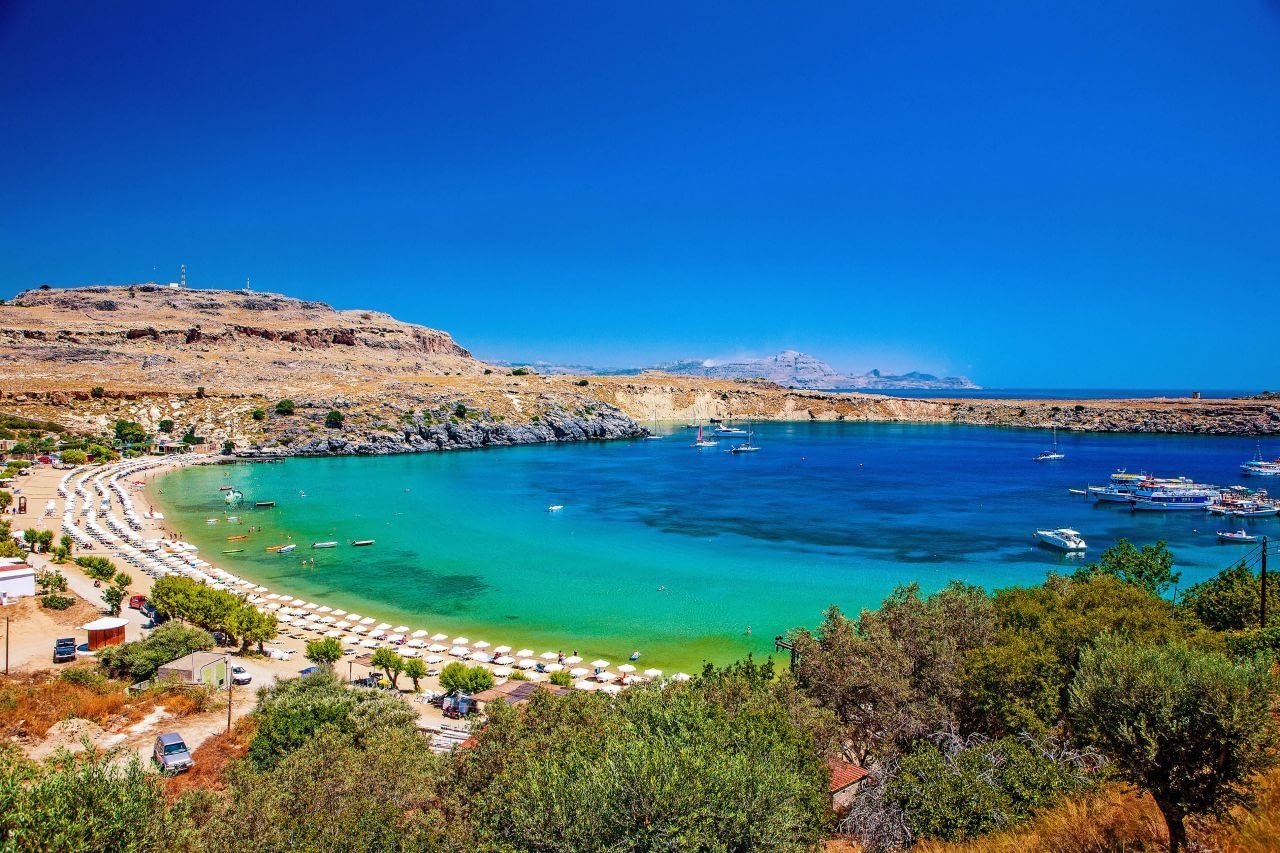 Approaching Lindos by rib you will be struck by the beauty of its traditional white houses,

the symmetry of their size and style. 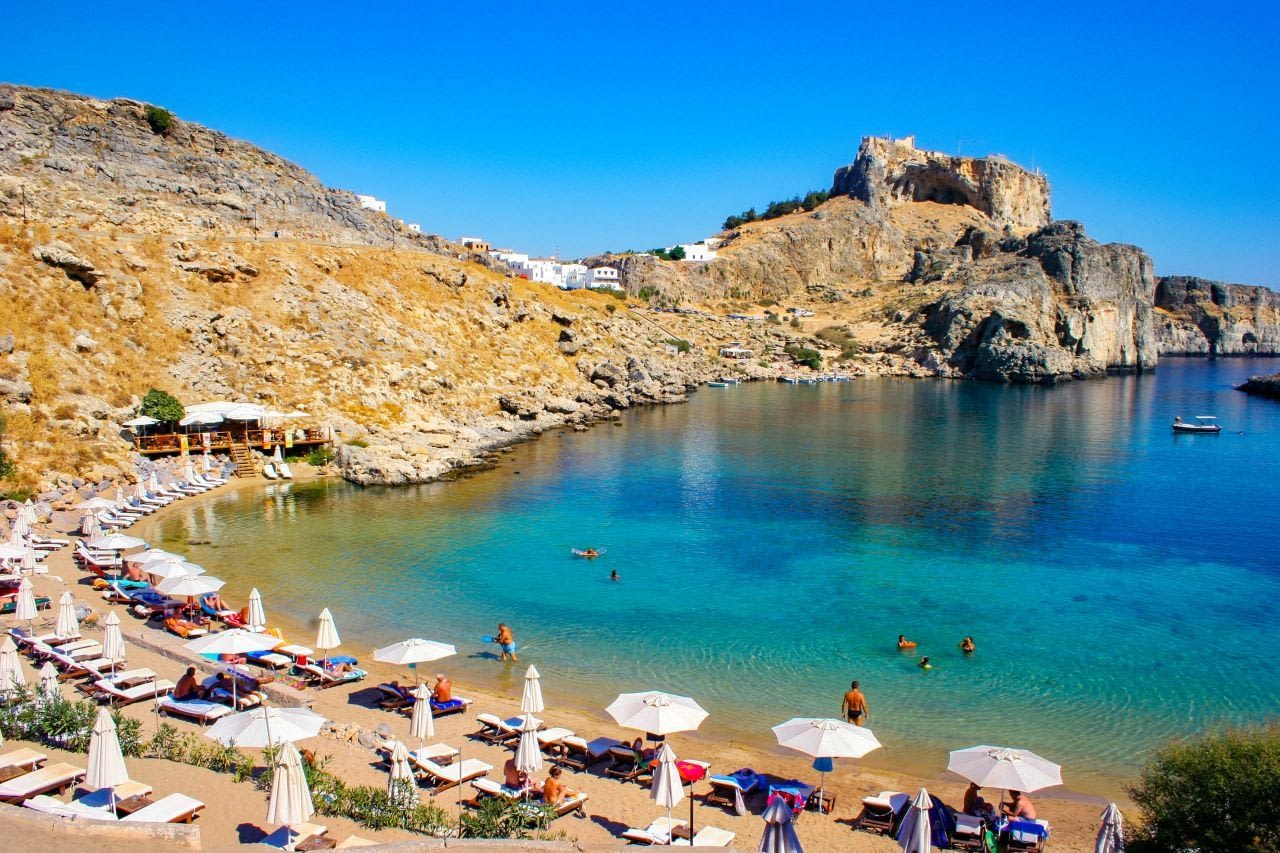 Many of these mansions are now luxury apartments, others are restaurants and bars;

others have stayed in the same families for centuries and are passed down from generation to generation.

The magic of Lindos remains.

The bay boasts calm, clear waters that are perfect for swimming and snorkeling.

to the town’s acropolis which is one of the oldest in Greece; a jewel that tops this magnificent town.

and tucked behind the town’s magnificent Acropolis. Like Lindos, it is breathtaking

but in different ways, relatively uncrowded and very relaxed. Swimming and snorkeling is a must! 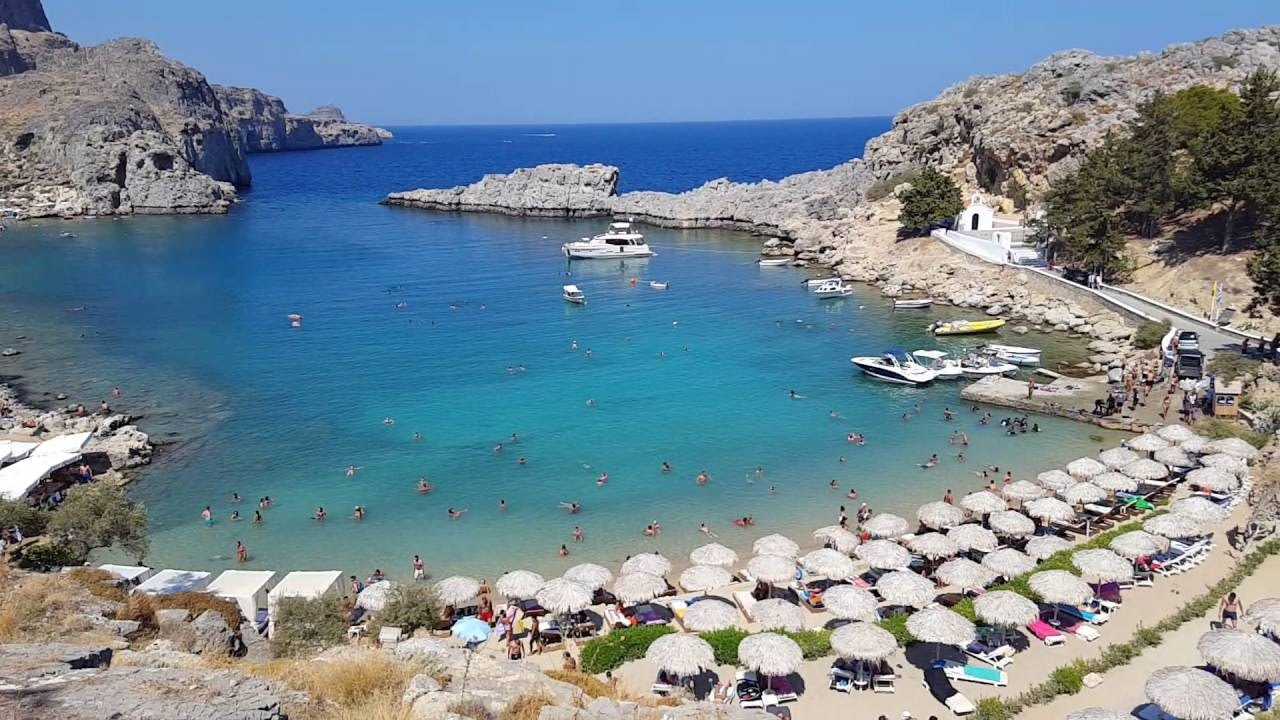 The bay takes its a name from the apostle Saint Paul who, it is claimed,

landed here in the year 43AD to preach Christianity to the Rhodians.

The small church built on the hillside is a very popular wedding location,

most likely because of its timeless setting and the beautiful views

it offers of the bay and the Lindos Acropolis